The inspiration from this dish came from, I believe, an episode of Good Eats that wikipedia tells me is from 2004 titled “Toast Modern” (Season 7).   My dad made french toast growing up and it is a comfort food.   The basic recipe I learned as a kid was simple – egg, milk, sugar, cinnamon.  Dip the bread then fry it.  Cover with powdered sugar and smile.  Alton Brown got me thinking, as he is wont to do, in different directions.   I made his recipe a few times and liked it, but one cold January night a few years ago I was completely out of eggs because I used them all making eggnog.    I never went back.

Recommended music to play while making this:  Zydeco or Dr. John
Recommended reason to eat:  Heartbreak or you bought too much eggnog
Recommended companion drink:  Milk, you sot.  Got like 3 kinds of alcohol in it.

So let’s get our ingredients together:

Pour eggnog into a dish large enough to hold a thick slice of your Italian bread.   Stir in two eggs, brown sugar, cinnamon, white sugar, and vanilla.   I prefer the texture of a little egg left on the toast, so I add the eggs last and beat them just enough to mix but not fully incorporate.

Keep a mix of the cinnamon & sugars nearby just in case the custardy mix needs a little rejuvenation for the last few slices.

Heat your cast iron skillet and toss a little butter in there to make it happy.  Soak the slices in the custard mix for 30 seconds on each side.   Set them on a rack to rest.   Go ahead and turn your oven on to 450 degrees while you’re at it.

You just want them in the pan long enough to lay on a good browning sear.   Pull ’em out and lay ’em back on the rack.   I used 4 thick slices for this recipe. 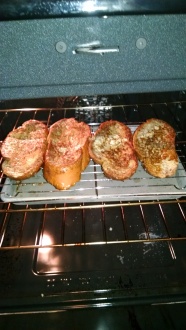 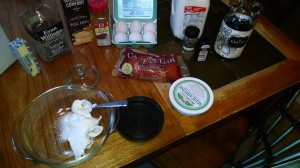 Looking good!  On to Step 3. You’ll see over here that I brought out the Kraken.  The whipped topping is mascarpone cheese, sugar, heavy cream, and dark rum.   If you’re paying attention to the picture, you’ll see some whole milk sneaking along the corner.   I didn’t have enough cream for what I needed and substituted a little milk.  It worked out alright.   Add the rum to taste and don’t go too crazy with the blender.   It should be creamy but you’re not churning butter here.   Set it in the fridge to cool.

Same cast-iron skillet.   Slice your bananas.  Add brown sugar, cinnamon, butter, and bourbon.   Crank it up to a medium high heat.   Let magic happen.  Keep an eye on your toast, it should be getting about ready.  Don’t want it to burn.

Better start getting the plates and cleaning up the table.  Wash your hands and get ready to feast on this beauty.   Get a nice cold glass of milk, too.

I’ll work on my plating.

Scoop out the mascarpone topping with an ice-cream scooper and dollop it on the fresh-from-the-oven toast.  It will start to melt almost immediately.   Layer on the bananas foster topping.   Get a steak knife and a fork.