Thursday, driving Squirrel to school, he laid his criteria down upon me.   When I pitched the initial idea of a daddy-date, I really was thinking I’d be on the hook for some animatronic pizza and maybe seeing a new Marvel movie.  He started ticking off his list, though, and I got excited.

I offered him three possibilities:

Standard protocol on a Kid Hike is that they have to make the shopping list.   He asked for a little help, so I gave him parameters but the list is all his.   Saturday morning, we woke up.  I got my Saturday mowing out of the way and threw the gear into the truck and off to the grocery store we went. 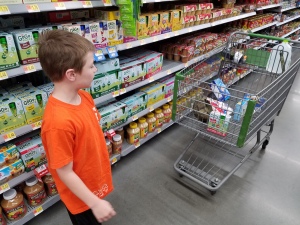 Saturday was a little bitter-sweet.  We found out on Friday that Momma transferred jobs, which was a great thing.  It opened up the opportunity for Squirrel to transfer schools.   He won’t be going to work with me next year.  Kinda sad about that.  Figured I’d have two more years to work at his school.  He didn’t take to me as easily as his brother did.  He’s a momma’s boy and that’s fine.  Bear Bait is my daddy’s boy.

I find that I’m more patient with the older boy because I understand him more.  He thinks like I think.  He feels like I feel.  Squirrel is a clone of his mother in just about every way.  There’s one way he’s pretty unique, though, and that is in his Love Language.  His main love language is gifts.  I used to interpret that as him just being greedy or spoiled, but it really doesn’t matter what the value of the gift is.  He just likes getting things from people he loves and he likes giving things to people he loves.

Since he rides to and from school with me every day, I end up taking him to the grocery store a lot.  I end up telling him ‘no’ a lot.   There’s always three, four things he just can’t live without.   I’m very much a “stick to the list” kind of guy.  I was sticking to the list when he brings me this $0.97 water pistol.   He wants it.  I think that’s just absurd.  I’ve been on countless camping trips, it’s just the two of us, what the hell does he need a dang water pistol for?   My mouth was all ready to let it go when I remembered this was his day.  What’s it going to hurt?  Sure, kid, throw it in.   You’d have thought I gave him a new car.

The trip down to Paris was beautiful and uneventful.   We stopped outside of Fayetteville for a cheeseburger and Squirrel chatted it up with some bikers at a gas station who let him look at their motorcycles.

Made it to the State park around 2:00.  Checked in at the visitor’s center and I let him pick out one of their fancy little walking sticks and three badges for it as a starter set.  An Arkansas State Parks badge, a Mt. Magazine badge, and one for the highest point in Arkansas.   He was giddy.  The campground was full, but I really didn’t intend to stay there anyway.  We drove over to the Brown’s Spring picnic area and parked at one of my all-time favorite drop-camping sites.   Squirrel grabbed his stick, made sure I had mine, and we eased down a small little trail to my very all-time favorite sitting spot. 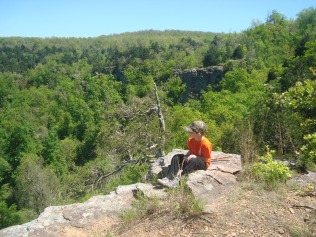 I first discovered this spot several years ago and the view from there is incredible.  It looks north out over the river valley and you can see the Boston Mountains colored onto the horizon like a picture postcard. 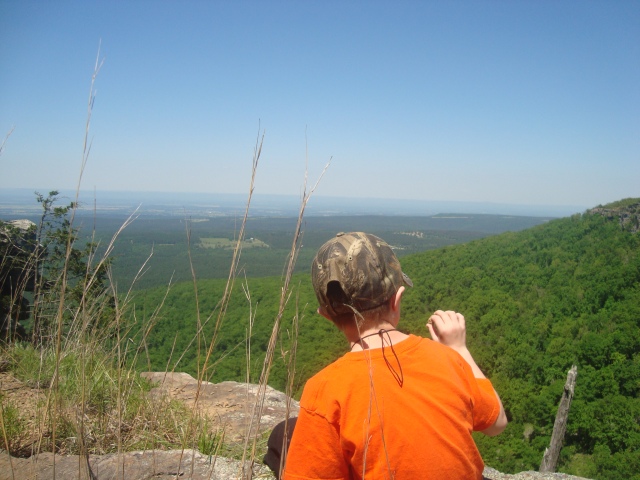 We eased away from the edge and headed back with Squirrel in the lead. He wanted to go the top of Signal Point, so we got the maps out and I let him plot the next leg.

Around 4:00 we made it back to the truck and I began setting up camp while he worked hard at being a boy.   He gathered sticks and rocks, ran off to a nearby stream to fill his water pistol so he could shoot at sticks and rocks, borrowed my knife to whittle things, told me a million and one “facts” about nature that he made up on the spot.

He got hungry around 5 and began quizzing me about how I was going to find a restaurant up here on the mountain.  Was it more of a McDonald’s kind of restaurant or a dress-up kind of restaurant?  (More toward the latter, but trust me, we smell much better than the last time I ate there.)  What kind of food do they have? (you’ll find something)  Can we get dessert? (Sure, but what about the s’mores?) Can we get double dessert?

In all it was a pretty decent afternoon.  Things didn’t get all Flannery O’Connor strange until after dinner.