Woke up on Sunday morning around six to the sound of blackbirds.  I heard the nylon shushing sound of Squirrel shuffling awake.  He said something derogatory about birds and I unzipped the hammock.

While he was sitting up rubbing his eyes, I breathed life back into the fire and fished out my keys from the bottom of my sleeping bag.  Got a jacket out of the truck for little man.  Got my cook kit.  There’s something to be said about the convenience of truck camping.  Can’t say it didn’t help with the last-minute nature of this hike to just throw my bin-o-gear into the bed and trust that everything I needed was already in there.    Maybe that’s how I ease Momma into more primitive camping? 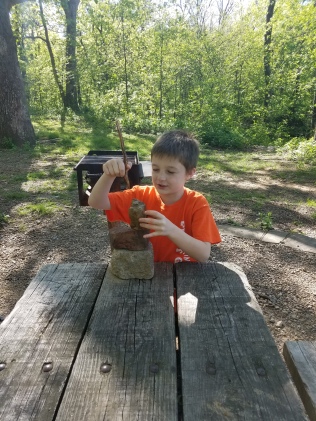 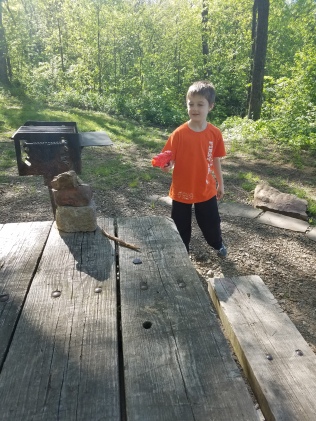 The boy goofed around with his water pistol and rocks while I got pop tarts and hot cocoa ready for him (and coffee ready for me).  It was beautiful and quiet.  There are very few better ways to wake up on a Sunday morning than the cool Spring dawn of May on a mountain in Arkansas.

“Are we going to church, Dad?”

“Oh yeah,” he interrupted dryly without looking at me, “we were there all night.”   Dang, son.

I started packing up and he outlined his morning for me.  He wanted to go see the “ghost pool” – which was how he remembered Buckman’s Pool on the eastern side of the mountaintop.  Then the visitor’s center to pay for the campsite and buy a bag of polished rocks as his “goodbye present” before heading home.

We loaded everything up, gave the campsite a last once-over, then headed out.  Reverend Jerry Garcia waved at us as we drove past.  We waved back.  He looked very well rested and, okay, healthy.   Hiking his own hike.    Parked the truck at the horse camp and headed out to our last little trail. 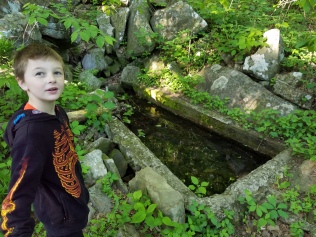 The first picture is my young companion demonstrating how he’s holding his breath in the ghost pool.  You can see the remnants of the rock wall behind him.   He is explaining to me in the second picture how that must be the ghost hot-tub.  Given my (grateful) inability to see ghosts, I could neither prove nor disprove his assertions and so leave belief up to the reader.  There are, after all, more things in heaven and earth than are dreamt of in even Horatio’s philosophies.

On the walk back, we worked on noticing and identifying the wildflowers that punctuated the late spring greenery alongside the trail. 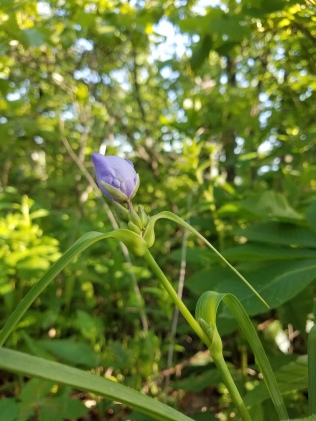 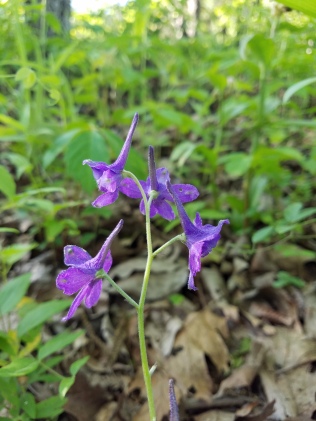 It was a beautiful morning and I was so close to celebrating a wholly successful hike when tragedy struck.

Well, 8-yr-old tragedy.   When we pulled into the visitor’s center, even though the sign indicated it was open . . . all the lights were out.   Someone, somewhere, was working on something and the young woman cleaning the place said that they wouldn’t have power until 11:00 a.m.

I tried to just leave a $20 to pay for the campsite and a bag of those rocks, but she seemed distressed at what her manager would say and no, she can’t take any money.   Squirrel didn’t say anything, he just left the center and stood outside crying.

He’s still a little guy and, man, he had his heart set on those stupid little polished rocks.  Normally, usually, I’d give him the “suck it up, buttercup” speech but this was his date.  He wanted it to be perfectly aligned with his plans and so far it was.   To have it go sideways at the very, very last minute was a hard blow for a little guy.   I gave him a hug and suggested we check out the lodge gift shop for a memento that would be almost as good as a bag of shiny polished stones.

He dried it up and moped to the truck.

I eased the Yota past the luxury cars parked cleanly in front of the lodge and we hopped out.  In the lobby, a small herd of chubby baby-boomers was coming to life.  Squirrel and I wove through the knot of recent retirees in their matching Harley Davidson costumes, talking about golf while their gratuitously pastelled wives complained to the cashier about the HVAC in their hotel room.  One beleaguered worker gave me a tired smile and asked if we were having a good morning.   I answered, “almost. . ” and explained the polished stone crisis.   Squirrel settled for a T-shirt he could wear to school the next day and I did my best to rescue the cashier from the still-ongoing entitlement fit being visited upon her co-worker.  (Except now it was some kind of issue about the restaurant, having moved on from the HVAC system.)

I sent him eye-rolling into the bathroom for a “just try one more time” before we got on the road.  He was asleep before we made it all the way down the mountain. 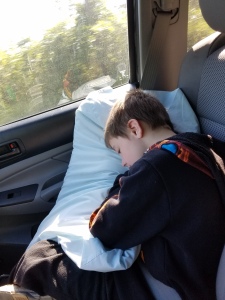 I woke him up once we got to Paris because I saw, out of the corner of my eye, what appeared to be a little park with a replica Eiffel Tower.

I geek out for little pieces of Americana (if you can accurately call the French connection here Americana. . .) and had to shake little man awake to see this.

He was glad I did.

And, because his name is Logan (no matter what I call him most), he had to take a picture of the county they surely named after him.   He forgot all about those stones. 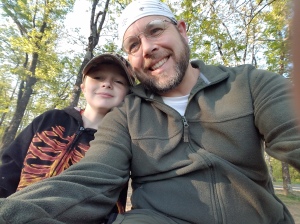