Easing into the overflow primitive campsites on Saturday afternoon, I couldn’t help but notice the motley array taking up the far south end of the area.  A huge transport van hauling a trailer.  An old Ranger with plywood sides lifting up a camper top.  Several tents, a hammock.  They were having a rowdy good time, but I didn’t see anything overly unusual other than the size of the group.

If you’re unfamiliar with Mount Magazine State Park, it is one of the state’s flashiest state parks.  A whole lot of money went into rebuilding a glorious lodge on the southern side.  There’s a nice paved road heading all the way up to the top and it, understandably so, is a nice tourist spot.  There’s a trail from the bottom to the top that Kat and I took on one dry July heatwave (and looking through my posts here, I can’t believe I didn’t write about it) but it isn’t the best backpacking spot because you still end up in a campsite at the top.

Heading over to the overflow at Brown’s Spring area does get you away from the mansions-on-wheels that will choke up the regular camping area.  And, truth told, you always find more interesting folks on the fringe anyway. 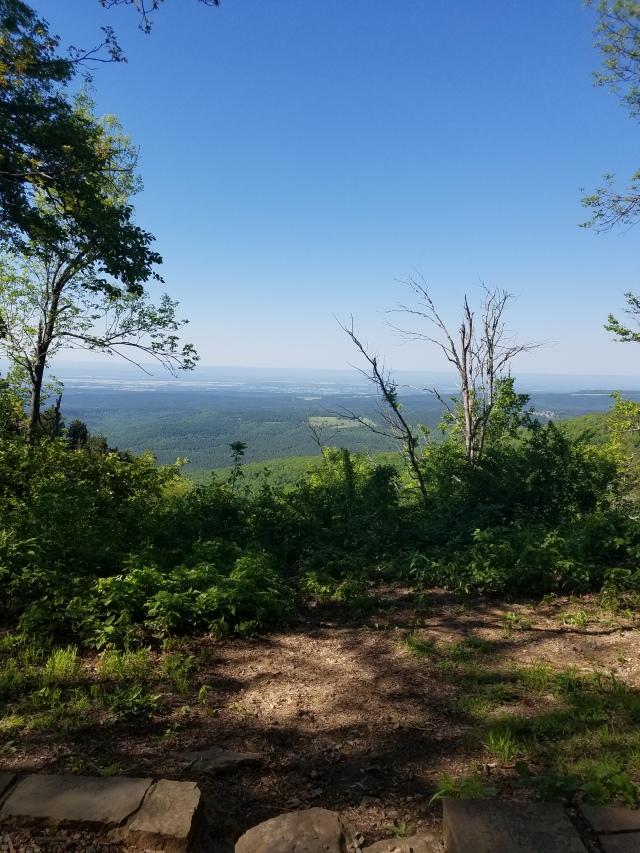 I usually shrink the pictures just a little to fit the text around, but this is the view from the picnic table on our site.  I can sit here for hours just looking out over that view.  Squirrel was hungry, though, so as soon as I tied up the hammocks we loaded up and went to the lodge to check another item off his list.

Here’s where this dips a little bit into a parenting blog.  See, that part above isn’t me.  I don’t get that.  When I head out into the woods, it is to get away from anything like this.  Little man, though, listed going to a gift shop as part of his perfect weekend so that’s what we did.   You don’t have to understand them to love them. . . and one of my main rules about backpacking with kids is that it isn’t about you.   The view was great, the food was decent, and Squirrel talked me into letting him have dessert (even though . . the s’mores. . . *sigh* okay).

We headed back to camp with plenty of sunlight left.  I got a fire going with wood scrounged from nearby empty campsites and a dead cedar branch I found.  Sat and watched him play.  Remember me complaining about that water pistol?  Yeah. . . that thing never left his hand.  He ran back and forth to the little stream nearby to fill it up.

While I’m watching him, I notice the caravan campsite has emptied out.  Gotten quieter.  Except for one guy, the oldest one I saw over there.  Looked like Jerry Garcia.  He wandered over and was just standing in the empty campsite adjacent to ours sort-of looking at the view.  I’ve run into all kinds of folks at campsites and out on the trail and, really, have only ever felt uneasy enough to move on once in twenty years (and that had more to do with the amount and variety of firearms they were carrying deep into the woods than anything else).  He was pretty obviously scouting the edges of campground etiquette and so I waved at him and offered him a s’more (because Squirrel was far more interested in enjoying the process than the product).

He chuckled something about not looking like he needed a s’more and introduced himself.  Asked me where I was from.  Said he ran a school.  A special school.  And they were out there on the mountaintop for a weekend retreat.  That explained why so many of them were teenagers.  The more he talked, the more comfortable he got in sharing, and the more I listened.   Don’t tell Bear Bait, but I have a pretty good measure that Squirrel is the smarter of my two sons.  And that’s saying something because big boy is sharp.  My little guy is staying near the fire, not looking like he’s paying attention at all but not missing a word. 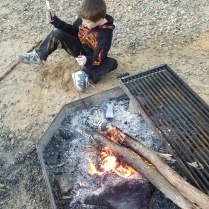 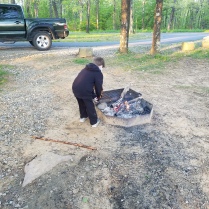 When Jerry said he ran a school, I started asking a few extension questions and it didn’t take long to find out that, well, it really wasn’t so much a school as it was a church/homeschool group that took in kids who got kicked out of other schools.   Admirable. . . working with at-risk youth has been a key part of my professional life.  He gave a little chuckle about how their methods are a little unconventional, but praise Jesus, they work.  The next ten, fifteen minutes I hear how he and his family members who run the school have faith healed autism, tourettes, heart disease, demon possession, and a host of other issues.  I was eating it up.  The more he talked the more I asked and the more he told.  Great, friendly guy.  Invited me and Squirrel to their camp later because after the kids got back from a sunset vigil they were going to have church.   I shook his hand, explained that I promised little man a night hike, but thanks anyway.

Squirrel, never looking up from his stick and stone fort, gave a parting “Thank you, Jesus!” to Jerry as he headed off to spread Jesus to another campsite.  ’bout this time, the sun was dropping low.

Squirrel wanted me to take him to “the spot” one more time so we could watch the lights blink on in the river valley.  I-40 was on the horizon coming on like a string of white Christmas lights and it was just beautiful.  As we traipsed through the undergrowth back to camp in the dusk, the tinny sounds of Christian Contemporary music being blasted from a boom-box cut through the night.  The closer we got, the louder it was.  The prayer meeting was in full effect.

I made sure little man brushed his teeth before I tucked him into his hammock.  The moon will be full in a couple of days, so it was pretty bright even after the sun went down.  I gave him his stuffed Grobie and got him all snuggled in.  One more drink of water.  Then we settled down for the night.   It was 10:00 pm on the nose when they turned off the praise music.  Squirrel, still awake along with everyone else in the campground, murmured, “I know they’re getting their Jesus on, but it’s nothing but the devil in my mind right now.”  That cracked me up.  He’s more observant than I give him credit for.