Garden walk with me

If I could only grow one herb, it would be rosemary.   It was the very first thing I put in the ground when I moved to the new house.   I put four plants in a tight row directly underneath my kitchen window. 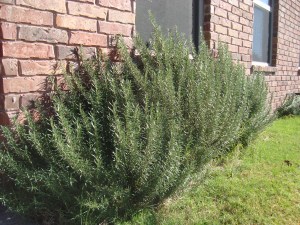 When the windows are open and the breeze blows through it, the whole kitchen smells of rosemary.

I’d like it to grow into a nice little hedge under the window where the bricks keep it warm enough to be usable year-round.  Granted, the leaves are thinner in the winter but it is still fresh rosemary.   I don’t bother trying to dry or preserve it since my plan is to grow it as much as an ornamental as anything else.  It is the first culinary herb my sons have learned to identify and Squirrel especially loves to run out and get a sprig for me.

I read somewhere that a healthy, vigorous rosemary bush indicates that the woman wears the pants in the family.  Momma would probably agree with that.   When it comes to a nice balance between an urban homestead and a lazy gardener, you just don’t get better than this. 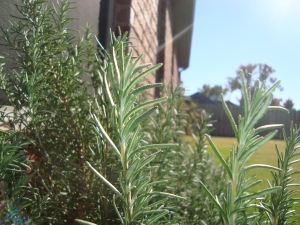 Over the next year, one of my personal education goals is to learn more about medicinal plants and herbs.  Rosemary oil is reported to have some antibacterial properties, but I’ll share more about that when I know more.

Near the rosemary hedge is a small lavender patch.  It was an experiment this past Spring and I love it so much that I’ll definitely expand it this next Spring.  Currently, there are no flowers on it because they’ve been cut and added to an arrangement inside.

Before we had children, Momma loved to make her own soap.  Now that they’re old enough to be a bit more help around the house and also very very interested in anything that feels like a science experiment, she’s getting back into it.   Right now, the only way we use it is as an aromatic/ornamental addition to inside arrangements and an insect repellent to discourage flies.  I didn’t want to harvest too much this year as it became established.  Upcoming plans include soap and maybe as a neat little addition to salads. 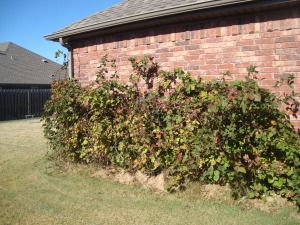 While it doesn’t look like much in mid-November, I’m very proud of this patch of brambles.   Just 18 months ago, there were five little canes – approximately two foot tall each.  Apache, Arapaho, & Navaho cultivars primarily.  Thornless with huge, sweet berries.  I saved the most aggressively growing plants from my last home and planted them before we even closed on the house.  I mulch them heavily with grass cuttings and water them sparingly.  Mixed in there is an unknown cultivar that is a thorned variety.  It is my first to bloom in early March and will produce berries through November.  I also foraged a few runners of wild blackberries breaking way from an old pasture.  They were destined to be mowed under by the city since they were too close to a sidewalk.

My goal is to have enough to make preserves, but my boys rarely allow me to save up enough.  They devour them as soon as they ripen and if I do manage to get a pint or so picked, then it ends up in muffins or pancakes or ice cream or cereal.

I do supplement by a little bit of urban foraging in the summer.  There are so many old pastures that are or will be transitioning into more subdivisions in this rapidly growing area.  Blackberries and dewberries grow wild and prolific along interstate green-ways and fence rows.   I’ll throw a bucket into the basket of my bike and ride out early in the morning.  I’m sure I look sufficiently dorky in my shorts and rubber boots with a milk crate zip-tied to the back of my bike.  The great thing about being over 40 is how easy it is to be cool with looking like a dork.

1 Response to Garden walk with me