Couple of weeks ago, I got a text from a cousin of mine – Z.   He’s a big duck hunter, see, and recently had a real nice trip over on the Eastern side of our state known for great waterfowl hunting.  Z. knows how much I love to cook, and his share of the hunt was more than he needed, so he dropped off a pair of snow geese.

I wasn’t quite prepared for what needed doing – seeing as how I’ve never actually prepared anything that didn’t come pre-wrapped with a barcode.  Now, I love wild game and I’m blessed to be in a family full of hunters.   (They just failed to make much of a hunter out of me.)   Until that Saturday, all of the wild game I’d received was already processed.

Z. pulls out an ice chest, tells me to grab a bag or something to hold the geese.   Drains off the bloody ice-melt and asks me if I have some heavy scissors.  I grab a pair of tin snips from the pegboard and he instructs me to cut off the head, the feet, the wings.  Drops them on the garage floor.   He demonstrates how to pluck a pinch of feathers, tells me he already gutted these, and out the door he went.  I didn’t see him again that day until much, much later when he came by to borrow my vacuum sealer.

By the time I thought to grab my camera, I had already plucked, skinned, and breasted the geese.  My hands were a sticky, downy mess and there were feathers all over the garage.

But, really, that isn’t what this blog entry is about.  I mean, it is what it was going to be about . . . but then my doorbell rang today and Z. was just standing there.   (Not much for calling ahead is Z.)

“Walk around with me to the garage.”

Sure.  I mean, didn’t have anything else going on this Saturday. I figured he was just going to return the vacuum sealer. 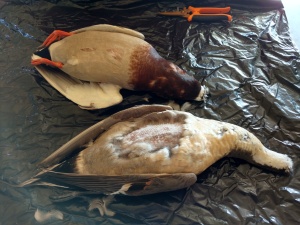 But he also had a pair of ducks.  One mallard, one pintail.  He handed them over, cut off the heads, and gave me a quick tutorial on how to gut a duck.   Cut here, pluck here. . . etc.

This. . . this blog entry won’t be a how-to on cleaning a duck.   I’m sure you can probably get some tips or something from this, but if you’ve ever actually done it before then you’re already better than I am.  I thanked Z. and promised him some good baskets of produce once the garden comes in.   (He’s going to get a bag of okra for this, for sure.)  Hugged his son and waved goodbye.   I got a few handfuls of feathers off the pintail before I thought to grab the camera.  Like I said, this isn’t instructional.  Not intentionally, anyway.  But it is something I’m looking to learn more about as I strive to move closer and closer to the source of my family’s sustenance.

There’s a way you can pinch and pull that leaves clean skin behind.  All the little downy tufts just come right off.   I figured that out about halfway into plucking the mallard.  I spent a lot of time going back over the pintail and getting those little bits of stubborn fluff.

I cut off the tail, just above the anus, and cut off the neck.  Skinned the neck and snipped the cavity enough for me to start scooping out the innards.  Saved the liver and heart – tossed ’em on ice.  Snipped right at the base of the throat and pulled out the vocal chords.  Went back in to find the lungs.  The pintail still looked like it had a 5 o’clock shadow, but I was discouraged with pinching fluffers off and decided to set it aside and work on the mallard. 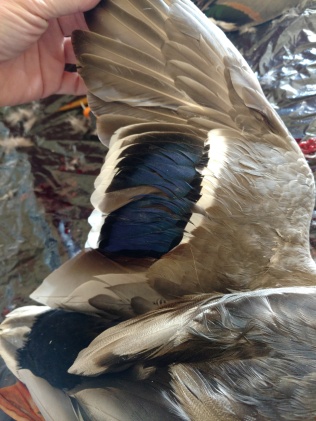 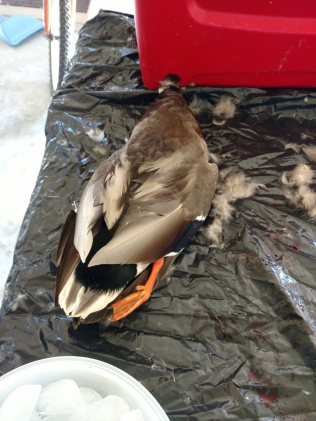 Step 3:  Figure out how to pluck about half-way into the second bird.

I skinned the neck and put it on ice then cut off the feet.  Those last little bits of fluff came off easily enough.  The skin wanted to rip around the wounds, but just a little pressure kept it in place.   The geese were MUCH harder to pluck and I ended up losing almost all of the skin and top layer of fat off of them.  I was right proud of myself by the time I got to this point.

Step 4:  Clean up and move the operation indoors.

The birds were starting to collect little bits of feather and fluff from the table and it was getting hard to tell what I’ve plucked and what was just sticking around.   I swept up everything I could into a trash bag, tossed everything I wanted to keep on ice and headed to the kitchen.

Brilliant idea!  I’ll wash off the feathers and fuzz.

Bad idea.   It washed off the dusting of fuzz, but it soaked the down onto the pintail.  See how much nicer that mallard looks?   I cleaned off the necks, livers, and hearts and went ahead and vacuum sealed those.  They could be chilling in the freezer while I finished off the ducks.

I did one final once-over to pluck off as much of the remaining down that I could, pinching with my knuckles and cursing the first three-quarters of my ignorance.  I then turned the gas burner on high and put the duck on like a glove – using the flames to singe off the last bits of inedible fuzz and what-not.

Finished Product – ready for the freezer. 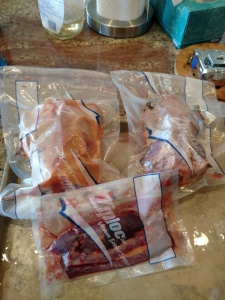 I already have a recipe in mind.   Something with wild rice, celery, onion, some greens, okra.  Make a brine out of orange juice. . . and then I’ll quarter them (man, I probably should have quartered them before freezing. . ) and steam them a little in a double-boiler before searing them in a cast-iron skillet and cooking them in high heat.  You wait.  I’ll link that one back to here.

Next time, I’ll be better at it.