(all the pictures in this entry were taken by Lucky.  I was too busy playing guide to worry with cameras)

After dinner, we stoked the fire and sat on the rocks surrounding it.   Now and again one of us would think of something to say, but mostly it was just watching the fire burn while the sun disappeared behind the mountain and the stars began to shine.

I got up to check the little thermometer hanging from my pack and it was just shy of freezing.  One mark of a good hiking partner is that there isn’t much need to fill the air with talk for the sake of noise.  Comfortable silence broken only by humorous anecdote or inquiry.  Lucky is going to work out just fine, it seems, with our little rag-tag group of hikers.  Already talking about how he could get his kids out on the trail. 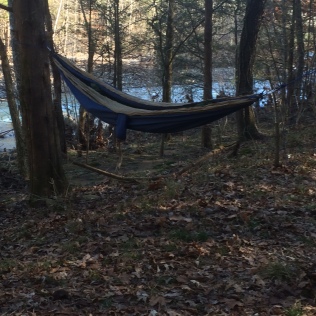 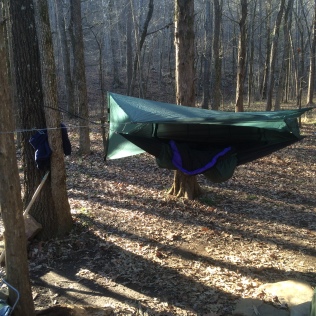 Around 7 or 8 or so, I crawled into my hammock and bundled up for the night.  Fell asleep almost immediately and didn’t wake up again until around 4 a.m. – which isn’t odd for me.

I read until about 5, some Backwoods magazine I saw on the rack next to the candy bars and impulse items.   Finally lost the battle of wills between a warm body and a full bladder.   Tromped out to handle business and breathe the fire back to life. 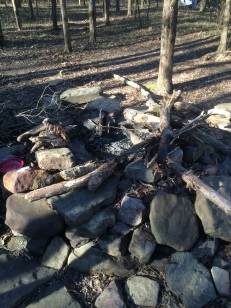 That may be one of my favorite parts of a hike. . . huddling over the white ashes of last night’s fire, everything bone-colored in the moonlight while you exhale warmth into being.  The smell of the leaves catching fire.  The soft crackle before heat turns to fire.

After breakfast we broke camp, tossed on the packs, and headed back out toward the last 7 miles.

This was the most beautiful part of the trail and we finally began to see people who all were heading clockwise.   Nice sized group camped near us at Rock Hole were still asleep when we walked by.   Another pair passed while we were going through a boulder field.    Stopped here and there at the various running streams and washes to let Lucky take pictures.

Stopped at Rock House to show him a brief short-cut I learned when caught in an overnight hailstorm with Bear Bait once.   Then headed into Quaill Valley.   Just as we came upon it, I stepped back and asked him to take lead.  I really wanted him to see it first.  Wanted to watch the look on his face when he came upon the waterfall.    Totally worth it.

Great spot to stop for lunch, so we did.   Walked around some.   He took some pictures.   Planned out some next hikes with other folks.  How to introduce them slowly to the trail.

Okay, maybe I took this one – but it was on his phone.

Back out, then, toward Hwy 74 where we took another break.  Watched a couple gear up in bright shiny new gear.   New outfits.  Big ol’packs.   I can’t help myself, people watching I mean.   I’m nosy.   I like to help.  So when they walked by, I asked them where they were going.   We talked a bit and I told them the address of this blog.  Hope they check in – I’d love to hear how their hike went. 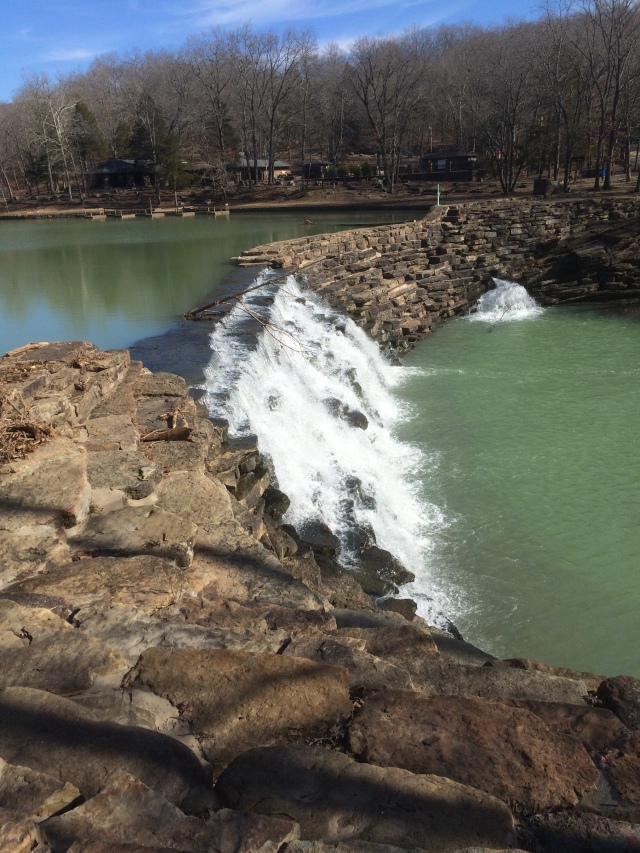 Descent back to the camp was beautiful, of course.   Lucky took more pictures.   Made it to the truck by about 1:00.   I made sure he got himself a patch when we dropped off the permit.

Introduced him to the concept of a celebratory cheeseburger on the way home.

Got a feeling he’ll be out in the woods again before too long.