2016 has been an interesting year.  One of those, should we live through it, that will end up being in my great-grandchild’s Social Studies report. . . if they still do those kinds of things in the future.

I’ve not been on that many hikes, which doesn’t lend itself to too many blog posts about hiking.   We’ve been settling in our first year in the new house.  Took a few unexpected financial hits but once we saw to the other side of those, Momma gave me the go-ahead to start turning the yard into food.

We live in a good neighborhood. . smack in the center of a rapidly growing area.  The hopeful anarchist and stubborn individualist in me chaffs at having a POA – but the pragmatic side of me appreciates things like property values and living very close to where we work and shop.   I’ve poured over the covenants and it looks like I’m going to be able to do almost everything I want to do.  No chickens, but I have a plan for that.

Back in May, I had a week off work and put in the first of what will be 5 raised beds.  This one is 10×4 and raised 2′ off the ground because my knees and back aren’t getting any younger.  I put the garden in late and haphazard in desperation to get something in the ground – following (mostly) square-foot gardening.  Bear Bait is 12 now and a hell of a carpenter’s helper.  He helped me build a compost bin that doesn’t look like a compost bin. . 4x4x4 w/ hose racks mounted on the sides.  The soil isn’t what I want it to be, yet, but composting and this year’s leaf drop will help me with that.   I’ve put in two smaller pre-fab plastic compost bins.  One for the raw matter, one for the first turn.  The big bin is as much as storage for ready compost as it is the final turn. 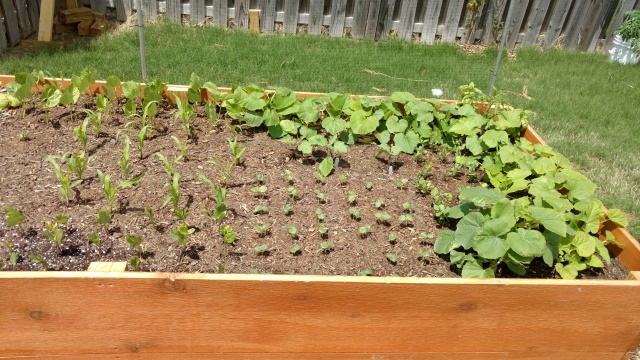 The blackberries I saved from the last house went crazy – producing two gallons of berries in their first year here.   I supplemented that by foraging wild blackberries & dewberries from the fence rows of some old pasture land that is slated to turn into more subdivisions soon.  I ended up with two gallons frozen berries and an additional three or so that we devoured before I could turn them into jam.

July, 2016 – before the Japanese beetles took the corn and squash bugs took the zukes

This year was also the year to get trees established.  In April, I potted a pair of Meyer lemon trees that will overwinter in my kitchen by two big sunny windows.  I planted two plum trees along a north fence.  I also put three blueberry shrubs in patio containers, put in a pair of raspberry plants on one fence, and transplanted a few of the more prolific wild blackberries I was foraging from.  This past October, I put two paw-paw trees and a Chicago-hardy fig in the ground . . and that pretty much ended my tree budget.

A 10x8x6 greenhouse I found on sale at Harbor Freight went up in October and I moved my potted plants in there.   I have a greenhouse crop of leaf lettuce, kale, and herbs holding on in there while the summer lettuce that bolted a couple months ago has come back from seed and we’re starting to eat off of that.

My goal is to produce more food than I can eat or store just with my family – and so will have to find ways to give or trade it away.  Already I’ve traded some blackberry shoots for a pot of strawberry plants that a friend thinned out and a bag of jalapenos that promptly fell prey to my newly learned pickling skills.  There are two vibrant Farmer’s Markets within a short drive of here.  I also had a few dog-walking neighbors who would catch me out working in the yard stop and comment about how they’d love to have a bit of a garden.  Come early April, I’ll start offering free seeds and try to set up a neighborhood trade cooperative.

First-ever batch of pickled okra.  Ran out of freezer space so had to get creative about what to do with the late-season pods.

This year has been about just getting it started.   Stop thinking about it.  Stop planning it out.  Stop wishing for it.

2 Responses to Planning the Suburban Homestead